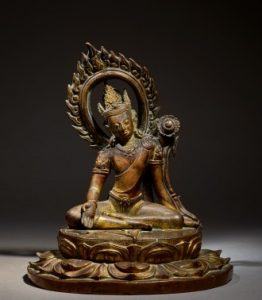 Avalokiteśvara is a bodhisattva (a being committed to attaining Buddhahood) who embodies the compassion of all Buddhas. One of the noteworthy lots at the upcoming Indian, Himalayan, Southeast Asian Works of Art auction, presented by Sotheby’s, is a gilt copper figure of Avalokiteśvara from 9th or 10th-century Nepal. The bodhisattva is seated on a wide lotus petal throne, wearing a shawl and dhoti. The head is encircled in an aureole decorated in swirling flames. Avalokiteśvara outstretches a hand in a gesture of charity. Another highlight is a Tibetan thangka depicting Amitabha. The thangka belongs to a group of paintings associated with Trehor Namkha Gyan, known as Lankajie, a renowned artist working in Kham during the 18th century. According to oral history, Namkha Gyan worked for Gelug establishments in the Kangdze region, as well as the Ngorpa Sakya monastery of nearby Dongtog.

The sale also features several illustrations, including a late 18th or early 19th-century piece belonging to a Ragamala series. To view the complete catalog and register to bid online, visit Sotheby’s.