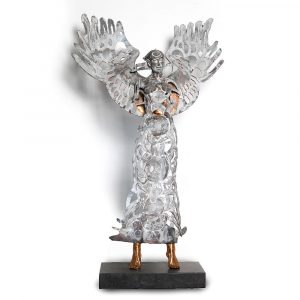 Miniature paintings were popularized in India around the year 750, reaching their zenith during the Mughal Empire. During the reign of Akbar, Indian miniature paintings combined elements of Persian art to create a new style. The colors used in these paintings were often derived from various natural materials, including indigo, vegetables, and precious stones. The upcoming Indian and Southeast Asian Art & Fine Estate auction, offered by Whitley’s Auctioneers, will feature a 17th-century Mughal Indian miniature painting. The piece depicts a hunting scene with allegorical motifs.

Also available is a 12th-century bronze figure of Narasimha. The half-man, half-lion deity is considered the fourth incarnation of the Hindu god Vishnu. The sculpture depicts Narasimha with the demon Hiranyakashipu in his lap. Also highlighted in the sale is a representation of Airavata and Varaha. Airavata, a divine white elephant of the Hindu faith with multiple trunks and tusks, is shown carrying Varaha, one of the principal avatars of Vishnu. View the full catalog and register to bid for these items on Bidsquare.