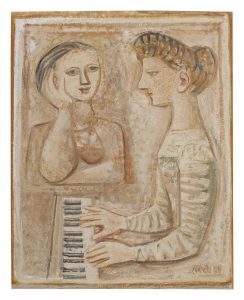 Massimo Campigli’s Femmes Au Piano (Women at the Piano) is one of the featured lots in the upcoming Impressionist & Modern Art sale, presented by Sotheby’s. In the painting, a young woman plays the piano for another admiring woman. It shows Campigli’s fascination with the Etruscan art style as well as Roman wall painting. These early influences would remain with the artist throughout his career.

The auction offers over 100 lots of paintings, sculptures, and works on paper from some of the most prolific artists in the 19th and 20th centuries. Included in the event is the work of French artist Bernard Buffet. One of the members of L’homme Témoin, an anti-Abstract art group, Buffet created over 8,000 works in the Neo-Expressionist style. His work frequently addressed the ideas of art history, death, sexuality, popular culture, and politics. George Grosz’s Punishment (Street Scene) is also among the key lots. Considered a leader in the Berlin Dada movement between 1918 and 1920, Grosz is best known for his pen-and-ink caricatures of Weimar Germany. Executed in 1934, the offered piece depicts a chaotic scene with armed officers. Register to bid for any of these lots on Sotheby’s.