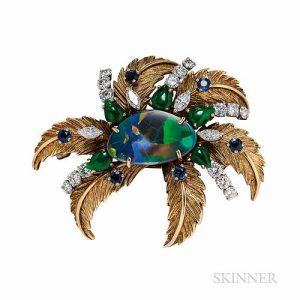 In 1866, Jacob Dreicer and his wife, Gittel, immigrated to New York from Russia. Two years later, the couple opened Dreicer & Co. They were the first American jewelers to introduce the latest diamond cuts from Paris, often creating pieces equalling the better-known Parisian houses. Dreicer & Co. was liquidated in 1926. Months later, The New York Times described the company: “Many of the famous strings and ropes of pearls and collections of jewels owned by persons prominent in the modern social and business world were assembled by Dreicer & Co.” The upcoming Important Jewelry sale, presented by Skinner, highlights an old European-cut diamond pendant drop set in platinum from the 1910s by Dreicer & Co.

Also known as “blue velvet” gems, Kashmir sapphires were first discovered in the early 1880s. The Maharaja of Kashmir purchased a sapphire mine that remained active for five years before the supply stopped. An antique Kashmir sapphire and diamond ring is among the key lots of the auction. The 5.93-carat sapphire is surrounded by old European-cut diamonds. Several pieces of Baroque, Edwardian, Art Nouveau, and Art Deco jewelry are also featured. To view the entire catalog and to place a bid, visit Bidsquare.