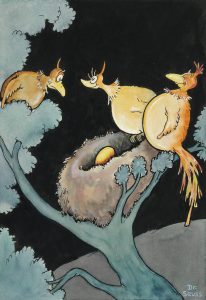 Saul Steinberg, a Romanian cartoonist, used pen-and-ink to critique and examine 20th-century civilization. Steinberg’s work titled 12 Biographies / A to B is a notable example of the artist’s style. This illustration is among the featured lots of the upcoming Illustration Art auction offered by Swann Auction Galleries. Of this drawing, he wrote: “Life is seen here like a voyage from (birth) A to the end, B.”

Another key item in the collection is a painting by Theodor Seuss Geisel—best known as Dr. Seuss. The watercolor painting is set atop a heavy black background to draw attention to the central image. Throughout his career, Seuss was only able to publish in black and white. This particular work represents the first and largest color project of his career. Another highlighted lot is a piece from Jo Mielziner. He is described as “the most successful set designer of the Golden era of Broadway.” His work, The Red General, depicts a set design for a 1929 play. Paintings and illustrations from Charles Schulz, Edward Gorey and others will also be available. View each of these lots and register to bid on Invaluable