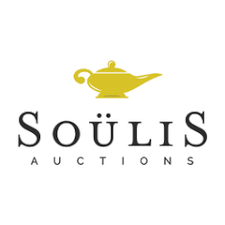 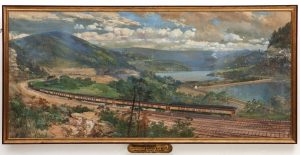 In the 1930s and ’40s, the Santa Fe Scout provided train routes between Los Angeles and Chicago. It was designed with the budget-conscious traveler in mind. Available in the upcoming Historically Significant Railroadiana auction, presented by Dirk Soulis Auctions, is a porcelain sign for the Santa Fe Scout. The auction’s 300+ lots represent not only memorabilia from train lines but also historical ships and airplanes.

Also available in this auction is a builder’s plate from the S.S. President Warfield, also known as the S.S. Exodus. Both the ship and the manufacturer’s name form a circle within this builder’s plate. In 1947, this vessel, then called the S.S. Exodus, was used in an unsuccessful attempt to migrate 4,500 Jewish refugees from Europe to what was then Palestinian land. Several model airplanes are also included in this auction. Among these is a Northeast Airlines model, which the auction house indicates was used by travel agents around 1950. View each of these lots and register to bid on Live Auctioneers.