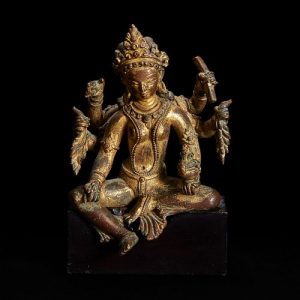 A Nepalese gilt copper alloy figure of Vasudhara will lead the upcoming Asian Arts auction, hosted by Freeman’s. In the ritual text of Hindu culture, Vasudhara is known as the deity of wealth. The available figure wears a large crown and bodhisattva jewelry pieces. She is seated in a varadamudra position atop an ebonized wood stand.

Also included is a Chinese blue and white porcelain ‘rouleau’ vase. This style is also commonly known as bangchuiping in Chinese. French scholars coined the term ‘rouleau’ to describe the style’s cylindrical shape and straight narrow neck that rises from an angular shoulder. This type of vase first emerged during the Kangxi period. A large Chinese polychrome stucco fresco panel from the Yuan or Ming dynasty is also available. Its center shows a celestial goddess wearing luxurious garments and an elaborate phoenix crown. She holds a sword in her left hand. Find other key Asian art lots and register to bid online on Bidsquare.