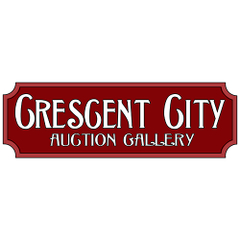 Hermès Kelly is an iconic handbag named after the American actress and Monégasque princess Grace Kelly. The princess famously covered her baby belly from photographers with the bag. Kelly helped popularize the style, and it was later named after her. An Hermès Kelly Retourne 35 handbag in blue clemence is available in the upcoming Crescent City Auction Gallery sale. The Hermès Retourne, unlike other Hermès bags, has reverse stitching that gives its frame a softer edge. It was made in 2007 of calf leather and silvered hardware. It also has a matching blue leather-lined interior with two side-by-side open storage compartments. Each Hermès bag is handmade by one craftsperson at a time.

A painting by Sir George Clausen, titled The Wave, is available in the auction. This oil on canvas portrays a man and a woman looking towards the sky as if captivated by something. The man holds a rake while the woman waves her handkerchief. Clausen was called a British rural naturalist painter of the late 19th century, known for depicting the country and people. He took inspiration from the Impressionist painters and Jules Bastien-Lepage. The auction has paintings from artists like Andreas Franciscus Vermeulen, William Tolliver, Jan van Ravenswaay, and others. Find the catalog on Bidsquare and register to place a bid.