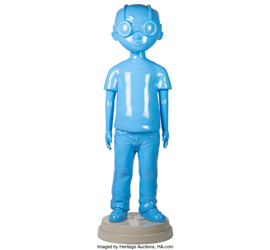 Equally influenced by Pop Art, the Tuskegee Airmen, and Saturday morning cartoons, Hebru Brantley’s Flyboy series takes a more lighthearted approach to social commentary. “I want to leave people with a good feeling,” says the artist of his work. “I want to engage with that light… certain people let go dim within them.” Several Flyboys by Brantley headline Heritage Auctions’ upcoming Urban Art sale. That includes a blue Flyboy that Brantley produced in 2013 for an installation in his native Chicago.

Elsewhere in the catalog, Brantley collectors will find a bronze sculpture of Flyboy and a female rendition of the character, titled Batgirl, which also leans on Brantley’s comic book influences. Other street artists represented include RETNA. His untitled diptych in this sale combines his signature pictograms with more conventional graffiti tags, such as a line of “X”s. View the full catalog and register to bid on Heritage Auctions’ website. Please note that all listed bids are current as of publication.