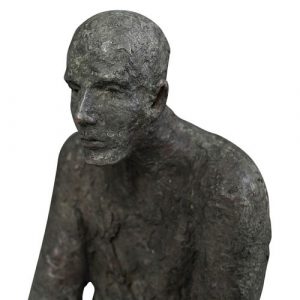 The Vendo 39 Coca Cola machine first crossed the production line in 1949. Over 80,000 of these vending machines were made, tempting those in gas stations, parks, and grocery stores across the United States to buy a Coke. Featured in the upcoming Eclectic Collection sale, presented by Akiba Antiques, is an example of the Vendo 39. Decorations on the machine include the “Have a Coke” message on the side, as well as a busboy offering the viewer a thumbs up.

Collectors of fine art will find a bronze piece by Dutch sculptor Hanneke Beaumont. As an artist, Beaumont is interested in the idea of contradiction. In this sculpture, she’s created a man who is seated but is not altogether inactive. He fumbles with his hands and stares into the distance, as if working out something of great importance. Decorative art is also available in this sale, including a Louis XVI oak armoire. The mirror is flanked on both sides by swinging doors, which open to reveal ten storage shelves. View each of the lots and register to bid on Bidsquare.