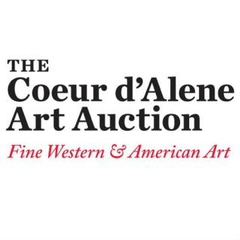 Commonly known as Grandma Moses, Anna Mary Robertson was an American painter best known for her folk paintings. Engineer and art collector Louis Caldor discovered her work in 1938 when he saw her paintings displayed in a New York drugstore window. She then gradually rose to popularity. Coeur d’Alene Art Auction’s upcoming Fine Western & American Art online sale highlights Grandma Moses’ The Church in the Hills. Completed in 1944, the oil painting reflects the artist’s life on farms.

Eanger Irving Couse’s Repose is another lot of interest. Founder of the Taos Society of Artists, Couse is widely recognized for depicting Southwest Native Americans in his own distinct style. According to art historian Mary Carroll Nelson, “Couse was always the painter, not the reporter. Yet he was so involved with the Taos people that he conveyed a feeling of contact with their sacred rituals.” The offered lot shows a Native American from Taos Pueblo laying on a river bank while playing a flute. View each available lot and register to bid online on Bidsquare.