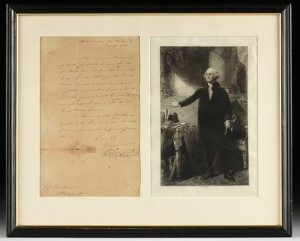 A letter signed by George Washington is one of the key highlights of the upcoming Fine Art & Antiques auction, presented by Simpson Galleries. Washington signed the letter while serving as Commander-in-Chief of the continental army at New Windsor. It was likely handwritten by Washington’s aide-de-camp, Tench Tilghman. The manuscript is dated “December 19, 1780” with ink on cream laid paper. This letter is presented with an etching of George Washington on rice paper by William Harry Warren Bicknell.

An oil painting by Jorge González Camarena titled Mujer Sentado (1961) is another noteworthy lot. The Mexican painter, muralist, and sculptor is known for his mural works, which occupy a prominent place in the Mexican muralism movement. To view the complete catalog and register to bid online, visit Bidsquare.