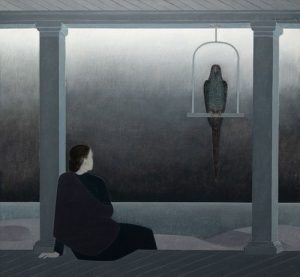 Berlin-native artist George Grosz rose to prominence while documenting the excesses of Germany’s Weimar Republic during the 1920s. He fled to New York soon after, though, understanding the danger of the emerging Nazi Party. “I carefully and deliberately destroyed a part of my past,” Grosz recounted. Headlining Barridoff Galleries‘ upcoming international fine art sale is a painting documenting George Grosz’s impressions of New York, downtown Manhattan in particular. The artist emphasizes towering high rises, bright lights, and confident passersby.

Collectors of 20th-century art will also find a piece by Will Barnet. The artist is known for his haunting depictions of dreamlike scenes. In this piece, a bird stands completely straight on a perch just above a fog of darkness. The eyes of both the bird and the person gazing at it are hidden, further mystifying the scene. Meanwhile, several works representing different stages of Walt Kuhn’s career are also on offer. That includes The Tumbler, an example of Kuhn’s late-career pivot toward portraits of clowns and circus performers. Walt Kuhn depicts these subjects in an empowering light, making viewers question the stigma associated with such careers. Register to bid and view each of the lots on Bidsquare.