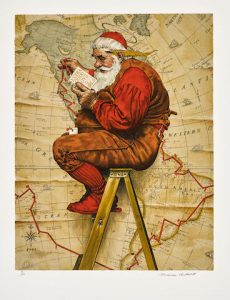 Sol LeWitt was a supporter of Conceptual Art, a term he coined in 1967. In his essay on Conceptual Art, the artist said, “All the planning and decisions are made beforehand and the execution is a perfunctory affair. The idea becomes the machine that makes the art.” LeWitt helped reinvent the relationship between artist and artwork. Numerous pieces by LeWitt will be offered in the upcoming Geometric Abstraction auction, presented by Bonhams. Highlighted among the lots is a 1996 painting titled Wavy Horizontal Lines on two sheets of Japanese paper.

Moby Dick, from the Waves by Frank Stella is also highlighted. Named after Herman Melville’s novel, the theme represents Stella’s most ambitious artistic endeavor: he produced a series of more than 200 related paintings, sculptures, and prints. The Waves, the first of the four series prints, take its title from one of the chapters of the novel. Another artist featured in the sale is Jésus Rafael Soto. Soto was a defining figure of both the kinetic sculpture and Optical Art movements. This auction represents two of his paintings from his Jai-Alai series. Taking its title from a highly popular sport in Latin America, these works manipulate both color theory and the dynamic between background and foreground. Browse the full collection and register to bid online on Bonhams.