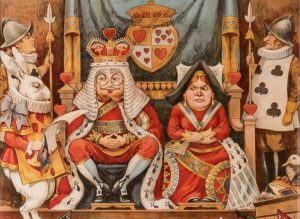 The Gambling Memorabilia & Playing Cards Auction, offered annually by Potter & Potter Auctions, this year includes American lots that date back to the 18th century. There are also many bound books on the topics of cards, cons, poker, cheating, and more.

Among the featured lots is a deck representing the Seminole Wars. The court cards are full-length, hand-colored portraits, with Jacks as Indian chiefs, Queens as classical goddesses, and Kings as American presidents. The deck was featured on the cover of Life magazine on May 30, 1955. Another available vintage deck is an astrological themed pack from Stopforth & Son, circa 1830. This deck is also hand-colored, and the court cards are represented by mythological gods. The remaining cards each include depictions of constellations surrounding the suit symbols.

There are also several decorative prints and posters with card or gambling themes in this sale, as well as works of original art. Among these is The Card Game by Robert Mann, an oil painting depicting a group of six men and women playing cards in a parlor. Mann was a self-taught artist whose many exhibitions included a solo show at the Staempfli Gallery in 1975. The Card Game was formerly owned by actor Robert J. Wagner. View any of these lots and register to bid on Potter & Potter Auctions.