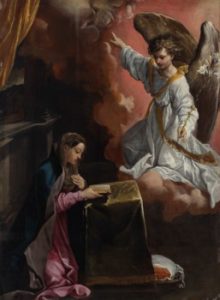 Augustino, Annibale, and Ludovico Carracci comprised the Carracci family of painters. In 1582, the Carraccis founded an art academy to spread their original artistic theories and rebel against the highly stylized works of Mannerism in the Italian art scene. The iconic ceiling of the Gallery of the Palazzo Farnese in Rome is the cornerstone work of Annibale Carracci, the most popular of the Carracci family. The upcoming Christie’s auction of Old Master Paintings and Sculpture highlights Annibale Carracci’s work, titled The Annunciation. The available painting was unseen in the auction world before its reemergence in 2013.

Another lot of interest, titled Master of the Wallraf Triptych, depicts several biblical scenes. Named in honor of its earliest known owner, Ferdinand Franz Wallraf, the creator of the piece remains unidentified. The painting features the original molded frame and hinges. Works by Henry Fuseli, Lucas Van, and other Medieval to Neoclassicist artists are available for sale. To view the full catalog or to place a bid, visit Christie’s.