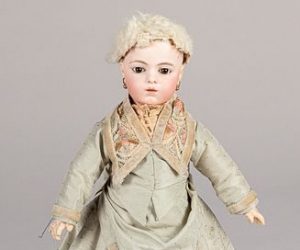 Porcelain dolls began emerging in France during the 1850s. While they first appeared as popular children’s toys, vintage bisque dolls would later become revered collectibles. 19th-century dollmakers initially struggled to incorporate more life-like features. It was only after the discovery of Chinese porcelain that the artisans were able to create detailed painted faces, human-like features, and realistic clothing. In the second session of the upcoming Online Only Decorative Arts auction, a selection of French bisque dolls will be offered by Pook & Pook, Inc. Among these, French Bru JNE Bebe bisque dolls and a Jumeau fashion doll will be available for bidding.

A tin advertising sign for Sen-Sen chewing gum will be presented in the sale. The available Sen-Sen sign shows a city street scene with two men holding packets of the gum. It reads “5 Cents – Grown up little Boys like it.” A DC Comics Superman comic book rack that was once a store display is another standout lot in this online auction. The rack stands 62 inches tall and still has the original placard inscribed “for the best in comics reading—the line of stars.” View all 693 lots, including advertising signs, lithograph trays, furniture, collectibles, and pop culture, on Bidsquare.