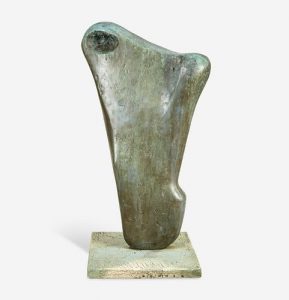 Freeman’s upcoming Modern and Contemporary Art auction will present a major bronze sculpture by Barbara Hepworth. One of Britain’s first abstract sculptors, Hepworth found inspiration in the Yorkshire countryside where she grew up. The naturalistic stone-like sculptures of Hepworth’s early career gradually evolved to include sharp edges and more human shapes. The artist cast the available bronze, titled Torso II (Torcello), while coping with the death of her son in World War II. The piece belongs to Hepworth’s anthropomorphic torso series. It features a dimpled texture, deep hollows, and a slender base. Other notable sculptors represented in the sale include Henry Moore, Fritz König, and Allan Houser.

Modern and contemporary art collectors will find some of the most famous 20th-century artists in the auction catalog, from Andy Warhol to Pablo Picasso. A print of Warhol’s Mao is among the leading lots. Picturing Chairman Mao Zedong in bright green and blue, the piece was printed in 1972. It includes a handwritten dedication to Janet Solinger, a prominent New York arts administrator. Picasso’s Trois Femmes is on offer as well. This 1960 color linocut depicts a group of three women on a coffee brown background. The women appear to be stretching and welcoming the morning. Visit Bidsquare for more information and to place a bid.