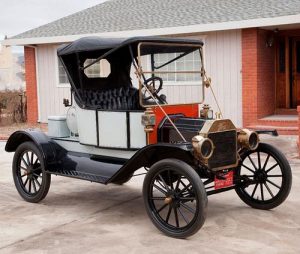 Henry Ford wanted people to travel far, faster. He started working on automobiles meant for working families, boosting his production with the assembly line. One of his earliest cars, called the Model T or Tin Lizzie, was produced by the Ford Motor Company in 1908. A Ford Model T Torpedo made a few years later is available in the upcoming Frances E. Tarzian Antique Car Collection sale, presented by Turner Auctions. The auction house guarantees the originality of the parts of this restored model. This automobile is a limited edition produced from 1910 to 1912.

A 1919 White Model 15, 3/4-ton stake side truck is also available in the auction. The restored car won First National 1967 (Niagara Falls/Junior) and First National 1968 (Senior). Another available car that has won several Antique Automobile Club of America Awards and the 1988 President’s Cup is a 1907 Schacht Runabout high wheeler. The Cincinnati Schacht Motor Car Company produced cars with wheels and seats like carriages, known as high wheelers. Turner Auctions has selected four automobiles for this sale, which is available for online viewing and bidding exclusively on Bidsquare.