Folk Art & Textiles from the Collection of Two Sisters, Washington, DC Plus Addi 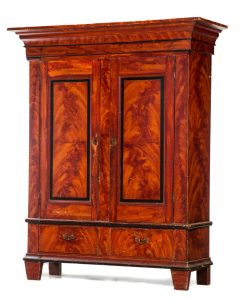 Washington Crossing the Delaware by Emanuel Leutze is one of the most recognized American paintings of the 19th century. Completed in 1851, it depicts George Washington, along with his troops, crossing the Delaware River during the American Revolutionary War. The scene takes place on December 25, 1776, when the American troops staged a surprise attack on the Hessians at Trenton. An early replica of the painting is featured in the upcoming Folk Art & Textiles auction offered by Garth’s Auctioneers & Appraisers.

A 20th century German shotgun is another highlight of the sale. This Heym model 33 deluxe rifle has a walnut stock with a checkered grip. Game scenes are engraved on the wood. The auction also offers several samplers; one notable lot among them depicts Adam and Eve and a fruit basket in a maple veneer frame. Other lots include a one-piece decorated wardrobe with two paneled doors and two dovetailed drawers, an early 20th century hooked rug depicting sheep and other farm animals, and a quilt bearing appliqued military symbols and crosses. Explore the full listings and register to bid online on  Invaluable