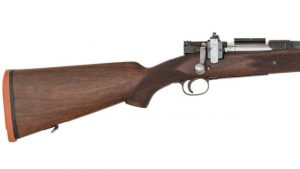 Rifle and weaponry enthusiasts will discover a wealth of  history and culture in Cowan’s Auctions’ upcoming Firearms and Accoutrements Auction. With an expansive assortment of over 300 available weapons, interested collectors will have a broad selection to pick from and top off a firearms collection. Almost every weapon in the collection is mechanically operational, a bonus for many of the older-style guns. Military-style long rifles are contrasted with more compact pistols, several of which also include their original box and attachments. History buffs will particularly notice several rifles used in World War II, as well as a rare Egyptian Rasheed carbine.  And auction is not just limited to rifles and shotguns. Several intriguing ammunition packages and a 19th century sword is also in the mix. Peruse the complete catalog and register to bid on Cowan’s Auctions