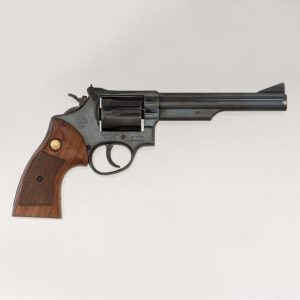 Firearms shaped world history. In the centuries following the invention of gunpowder in China, the world’s armies and rulers worked feverishly to create new weapons that would change the course of a battle from great distances. Over the centuries, firearm technology has developed from holding a burning fuse to a hole in the end of a gunpowder-filled tube to the automatic weapons we see today.

In their upcoming Firearms and Accoutrements Auction, Cowan’s Auctions offers a curated selection of world-changing firearms and weapons. Consisting mainly of modern weaponry, the auction shows the rapid evolution of rifles, pistols and shotguns since the turn of the 19th century. Featured firearms include antebellum flintlock muskets, revolving-barrel pepperbox pistols, standard-issue rifles from both World Wars, concealed revolvers from Cold War-era and many more.

It will be difficult for any firearm enthusiast to choose from the available collection. Those with an interest in the years leading up to the American Civil War would find the Trenton-marked rifle musket dated 1864 fascinating. World War II buffs will enjoy a great selection of weaponry, including the Third Reich Red Cross officer’s dagger, a standard-issue Smith &Wesson special Victory-model revolver, several M-1 carbines from Underwood, a National postal meter, and products from Inland and other manufacturers. Finally, a barracks rack made to hold them all. For a taste of modern weaponry, the Colt AR-15 A2 in near-new condition would be an excellent selection. To view all the available firearms and accoutrement, register to bid on Cowan’s Auctions today.