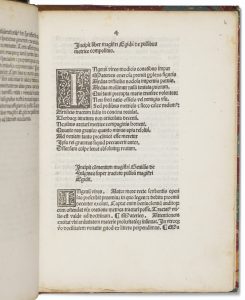 Francis Scott Key wrote the lyrics to “The Star-Spangled Banner” during a difficult period in the War of 1812. While watching the British attack Baltimore, Key felt inspired by the resiliency of the city and composed his song within days of the American victory. The Baltimore Patriot was the first publication to release the song, featuring it in the newspaper’s first printing after a ten-day hiatus. The editors wrote that the song was “destined long to outlast the occasion, and outlive the impulse, which produced it.” A copy of this first newspaper printing will appear at the upcoming Christie’s sale of books and manuscripts. One of only three known surviving copies, this lot includes one sheet with five columns on each side.

Several other first printings will be available in this auction, including the first edition of a 16th-century monster book. It is full of woodcuts attributed to François Desprez, many showing beings described as grotesque and whimsical. This book was never intended to frighten, but was rather self-described as “an object of laughter, an antidote for melancholy, and a pastime for the young.” Other notable lots include a signed copy of Virginia Woolf’s Mrs. Dalloway, early Spanish navigational books documenting the New World, and a writing desk used by Charles Dickens. View the full catalog and register to bid for these items on Christie’s.