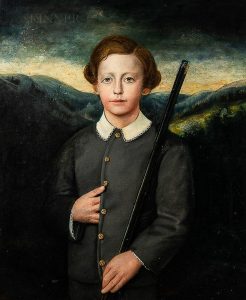 The artistic duo Christo and Jeanne-Claude were best known for their large scale works, wrapping buildings and landscapes in lengths of fabric. Among their most famous works was The Pont Neuf Wrapped, which was staged on Paris’ oldest bridge. After a decade of negotiation, Christo and Jeanne-Claude finally got permission to install the piece in September of 1985. The duo covered the bridge in honey-colored fabric, the same color as “Paris Stone” for 14 days. In an interview with Le Figaro in 1985, Christo said, “I wanted to transform it, to make an architectural object, an object of inspiration for artists… ephemeral like my dream.” The upcoming Skinner event presents an original sketch for The Pont Neuf Wrapped.

Also showcased is a bronze piece by the prominent French sculptor and animalier Isidore Jules Bonheur. After studying painting, Bonheur discontinued working in oil in favor of sculpture and became widely recognized for his small bronze statues of horses, cattle, sheep, and dogs. Titled The Steeplechase, the available piece shows two jumpers. Interested collectors can view the full listings and register to bid online on Bidsquare.