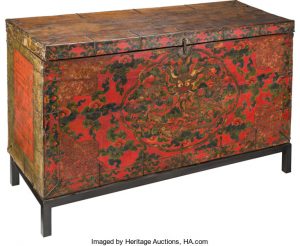 As the first day of the auction wraps up with fervor, the second day brings out an atmosphere similar to that of Qing Dynasty. An assimilation of items from that era, such as Chinese canton enameled copper tray and a Tibetan painted wood chest from 18th – 19th century, is a major part of the auction. Second day also has a beautiful Asian silk painting which is open for interpretation. It depicts houses and trees on top of clouds.

More surprises are in store with pieces like a pair of Chinese Hong mu hardwood (red wood) yoke-back chairs from the late 19th century. Because of their simplicity, this type of furniture was an essential part of the Ming era aesthetics as they appealed to the elites. Ranging from $600 – $6000, the second session is rich with history and stories from their respective eras.  And it goes without saying that Asian art admirers simply cannot miss the auction. Visit Heritage Auction to bid for these invaluable items.