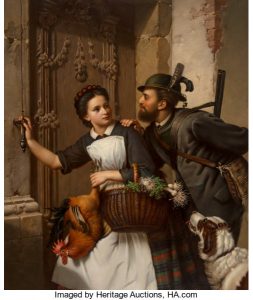 In Roman mythology, followers of the god Bacchus were called bacchants and were often depicted as intoxicated or frenzied. Highlighted in the Fine and Decorative Arts Monthly Online Auction, presented by Heritage Auctions, is a marble sculpture of a bacchant. This 1990 French piece shows the bacchant sitting naked on a stone, surrounded by flowers.

Also featured in this event is Salvador Dalí’s Christo de San Juan de la Cruz sculpture. During World War II, Dalí returned to his Catholic faith and a more traditional form of art, far removed from his previous Surrealist work. This figure, produced in 1974, reimagines Saint John of the Cross’ vision of Jesus’ crucifixion. Dalí regularly revisited this moment in Christian history, including in his 1951 painting of the same name.

Among the event’s highlighted lots is Peter Max’s Peace on Earth II. In the original Peace on Earth painting, produced in 2001, the Statue of Liberty stands before a globe with an American flag draped behind her. It was the artist’s initial response to the 2001 attacks on the World Trade Center. Unlike the original, Peace on Earth II displays the rainbow-hued colors distinctive to Max’s work. However, the central image of the Statue of Liberty remains the same as the 2001 version. Those interested in this or any other piece can register to bid on the Heritage Auctions website.