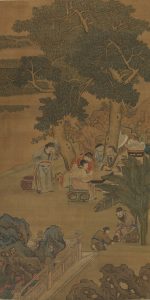 Sotheby’s showcases the craft of traditional Chinese landscape paintings and calligraphy in this upcoming auction. The 71-lot event features work from some of the most popular artists in Chinese history, such as Zhang Daqian and Dong Qichang.

Qichang was a calligrapher and artist from the late Ming Dynasty. In his landscape paintings, he preferred to depict locations, as he was known to change details if it helped his expression. A landscape and calligraphy piece on gold paper of his has an estimated value of over $100,000.

Born over three hundred years later than Qichang, Zhang Daqian was considered one of the most important Chinese artists of the 20th Century. Like Qichang, he eventually transitioned away from traditional depictions of landscapes and moved towards Expressionism. Daqian’s Ode to Red Cliff After Kuncan is available in this auction. Above the beautiful landscape are two seals by the artist and a poem.

Qichang and Daqian’s pieces are among the most noteworthy in this auction. However, the lot with the highest estimated value is Zhu Yunming’s Ode to the Goddess of the Luo River. A scholar from the Ming Dynasty, Zhu was known for questioning traditional values. Contemporaries believed his eccentricities informed his “wild-cursive” style, which is on display in this piece. Those interested in any of these pieces can register to bid on Sotheby’s website.