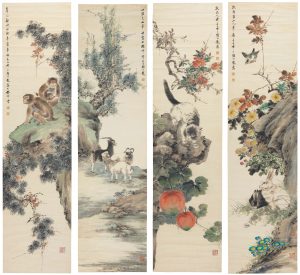 The Fine Chinese Paintings Auction, offered by Christie’s, is a “diverse sale of paintings and calligraphy from several periods in many styles and at a wide range of prices.” The auction offers dramatic 17th century works to lively paintings by ever-popular Zhang Daqian and innovative contemporary ink works.

Among the most valuable of the lots is a work by Fu Shan. Shan was a well-known calligrapher and art theorist during the late Ming and early Qing Dynasties. Seventeenth-century calligraphy was modeled on rough, broken epigraphs of ancient bronzes and stone artifacts, which led to the formation of the stele school. Fu Shan was a principal force of this school and this style continues to be reflected in Chinese calligraphy today. Fu Shan was also well versed in poetry, literature, and painting and his calligraphic works are highly regarded and sought after.

Another celebrated artist in this collection is a bit more contemporary. Zhang Daquian–who is represented by his painting Hibiscus, as well as several others—was one of the best-known and most exceptional Chinese artists of the twentieth century. He was originally known as a guohua or traditionalist painter. But by the 1960s he became renowned as a modern impressionist and expressionist. Expect his paintings to create a lot of interest.

An even more contemporary artist represented here is Huang Yongyu, also a well-known writer. He was a professor at the Central Art Academy and became one of the principal targets of the Cultural Revolution. Huang was incarcerated in an “ox-pen” prison, and was later exiled to the countryside. His painting up for sale is Cranes, which depicts a number of cranes entering the frame from the right as if the entire flock of birds is clamoring for space as it races to the left. This striking work is full of activity and contrast, and nicely represents one aspect of this exciting artist’s work.

View any of these lots and register to bid at Christie’s.