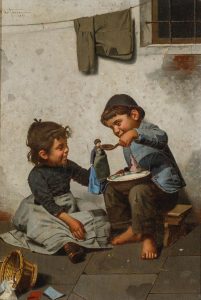 One of Peter Sculthorpe’s watercolor paintings titled Parker’s Cove is available in the Fine Art Online Auction, offered by Shannon’s. The winter scene is named after a Canadian town that the artist visited. In Sculthorpe’s words, “The inspiration for my work comes from areas spanning the stark regions of Newfoundland to the lush and fertile valleys of the South. The landscapes offer me form; the people I’ve met in these places give them color.”

The French landscape of the Seine valley inspires another key lot in the auction. It is an oil painting by a 19th-century American artist named Daniel Ridgway Knight. He mostly painted landscapes and women outdoors, which helped him gain popularity and success. Another featured oil painting is titled Ulysses. The piece was created by Milton Resnick, who produced many notable works that established him as an American Abstract Expressionist. His works are displayed in the Metropolitan Museum of Art and the Whitney Museum of American Art, both in New York.
Also among the 185 lots in this auction is an Andy Warhol signed U.S. one-dollar bill. Warhol was said to have signed cigarettes, food, and dollar bills to make money. One of his signed U.S. notes sold at Christie’s in 2012 for GBP 8,125 (USD 10,000). To view the full catalog for the upcoming sale, visit the Shannon’s website.