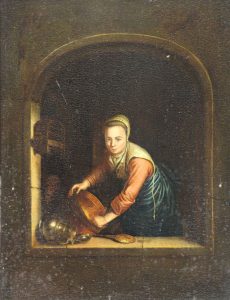 David Hockney is a British painter and photographer. He is considered to be one of the most influential British artists of the 20th century, particularly due to his contributions to the Pop Art movement of the 1960s. The upcoming Fine Art, Jewelry, Asian, Midcentury and Antique Estate Auction offered by Clarke Auctioneers & Appraisers features two of Hockney’s works. One, titled Celia Amused, shows a smiling woman standing with her hands in her pockets in front of a table and potted flower. The other, titled Celia Musing, shows the same woman by the same table, shifted slightly in her stance. Both lithographs are signed and dated 1979.

Also available in the auction is an 18-karat gold engagement ring. This ring features a round, brilliant-cut 2.73-carat diamond. A carved pair of menorahs will be showcased as well. They stand 51 inches tall and are 26 inches wide. Other items included are a Moses Soyer oil painting of a nude woman, a Victorian carved German desk, and a mauve-colored Madeline Weinrib vintage carpet. Register to bid for these items at Clarke Auctioneers & Appraisers.