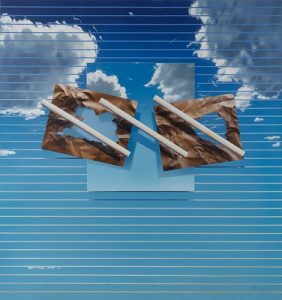 The upcoming Fine Art + Design Selections event, presented by Hindman, brings to auction 274 pieces of art, furniture, and jewelry. Highlighted among these lots is a painting, titled Welders, from John Chamberlain. In the late 1950s, Chamberlain began working on scrap metal obtained from wrecked automobiles, through which he discovered his distinctive style. The artist would go on to explore a variety of media in his later years, including fiberglass, photography, and painting. Chamberlain’s whimsical style can also be seen in most of his abstract paintings. Throughout his life, Chamberlain based his work on Abstract Expressionism.

The auction offers over 214 lots of fine art, including works from David Driskell, Aaron Bohrod, and Leonardo Nierman. An untitled painting from Nierman, a Mexican abstract painter, is among the highlighted lots in the event. Inspired by Surrealism, he was best known for portraying cosmic energy and earthly landscapes. A ceiling light by Alvin Lustig is also available. Lustig was an interior and architectural designer who worked to bridge the gap between creativity and technology. View each of these lots and register to bid on Bidsquare.