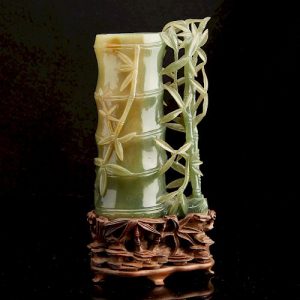 In 1914, an artist named G. T. Brown finished a painting of his deceased friend, Edward Espey, which Espey had left unfinished. The painting is a calming scene of a man on a horse passing through the Grand Canyon. Nearly half a century later, the first issue of The Amazing Spider-Man was published. In the aftermath of Uncle Ben’s death, Peter Parker must make ends meet as Spider-Man. What Espey’s painting and Spider-Man both have in common is that they are among the lots with the highest estimated value in the Fine Art and Asian Art Auction. The auction is a diverse collection of collectibles, fine art, and Asian art offered by Revere Auctions.

The Amazing Spider-Man #1 tells the story of Spider-Man’s origin and features the first Fantastic Four crossover, and the first appearance of Chameleon. The iconic cover art is by Jack Kirby and Steve Ditko. Revere Auctions notes that the pages of the comic are off-white to white.

As the auction’s name implies, there are also Asian art pieces available. Among the pieces with the highest estimated value is a 20th Century Chinese jade brush pot. The jade is carved into the shape of bamboo shoots. Below the pot is a wooden stand produced just for this pot. Those looking for an affordable lot of Asian art should consider a Japanese woodblock print of a man raising his hat. With an estimated value of $40-$60, the print could be an economical way to begin a collection. Register to bid online on Bidsquare.