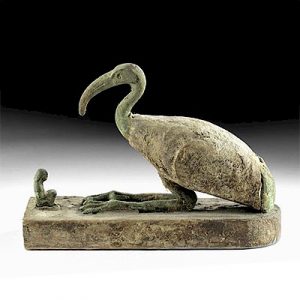 The rhyta was an ancient drinking vessel used by Iranians and other ethnic groups. An example is available in the Fine Antiquities, Asian, and Ethnographic Art auction, presented by Artemis Gallery. This rhyta, or drinking vessel, is in the form of a fish man. Liquid is poured into the fish man’s head and comes out his tail. Believed to come from Iran somewhere between the 5th and 7th centuries, this piece finds its way to auction from a private collection in Los Angeles. Artemis Gallery’s upcoming event offers 282 lots from civilizations such as the Egyptians, Moche, and the Mughal Empire.

In the Mughal Empire, colorless diamonds were highly valued and were predominantly worn by royalty. One lot featured in this auction is a Mughal ring with a 2-carat diamond set in 23-karat gold. In the front, the gold weaves a pattern of interlocking semi-circles surrounding the colorless diamond.

Representing the Moche in this auction is a copper crown. The Moche were a Pre-Columbian civilization who resided in modern-day Peru. This style of crown was used exclusively by the Moche for royal burials. Artemis Gallery’s report of this lot notes that the Moche intended to produce textiles that appeared to be gold but were sturdier than that mineral. In the case of this crown, the Moche used copper to create their desired illusion.

The lot with the highest estimated value is an Ancient Egyptian figure of an ibis and a worshipper. In Ancient Egyptian culture, ibises were associated with the god of knowledge, Thoth. Here, the worshipper prays at the feet of the ibis, showing the relative power of a god in the presence of a common worshipper. You can register to bid on any of these pieces on Bidsquare.