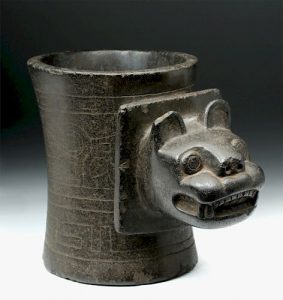 Headhunters on the Ifugao island preserved the skulls of the people they killed. This practice continued until Americans occupied the island during World War II. An example is available in the upcoming Exceptional Day 2: Pre-Columbian and Tribal Art auction, presented by Artemis Gallery. The human skull sits atop a boar’s skull, and a wooden platform allows the piece to be displayed during ceremonies. Like the skull, this auction’s 232 lots offer an intimate view of cultures from around the world, including Native Americans, Spanish colonialists, and civilizations across Asia.

The lot with the highest estimated value is a painted buffalo hide shield by Pueblo Indians. The buffalo hide’s thickness provided warriors with extra protection. Two horns surround a blue sun to decorate the top half of the shield. Another rare Native American piece is a tipi liner, also made of buffalo hide. Nine vertical columns of red diamonds decorate the liner, which was meant to cover the 14 to 16-foot tipi.

Those interested in purchasing these artifacts but looking for a more affordable option than the headhunter lot should consider a Naga monkey skull with horns. Naga shaman used skulls in ceremonies to fight off evil spirits. If you are interested in this or any other lot, register to bid online on Bidsquare.