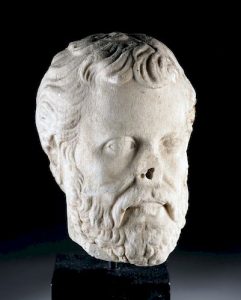 The Antiques & Asian Art Auction, offered by Artemis Gallery, is a two-day auction series. The lots on the first day blur the line between art and ethnography. Each lot is a reminder of the lifestyles and priorities of cultures such as the Ancient Egyptians, Greeks, Romans, and the Byzantine empire.

An Egyptian sarcophagus panel is among the lots with the highest estimated value. The panel dates back to 664-525 BCE. It is made with cedarwood that is not native to Egypt. Instead, it most likely came from Lebanon. The imported wood is just another reminder of how seriously ancient Egyptian culture took, burying the dead properly. Another notable piece from Egypt is a block statue of an astronomer. Hieroglyphic text on the statue indicates it was an offering to Amen-Re from the king. The lot’s detailed condition report outlines that parts of the statue have been restored, and some remain chipped or altogether missing.

From the Romans comes a nearly life-sized marble head of a philosopher. Produced sometime in the late 1st century CE, the head features wavy hair and a beard that was popular at that time among the intelligentsia. Centuries later, the Byzantine empire produced an iron and bronze spatha sword, also available in this auction. The spatha was used by the Roman Empire as well, but what distinguishes this spatha as being Byzantine is the short bronze cross guard, among other features. Those interested in any of these pieces can register to bid online on Bidsquare .