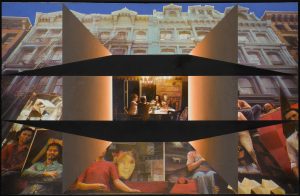 Sotheby’s fascinating auction Escape Artists 2.0: The Non-Conformists Online brings to light works by a second wave of avant-garde Soviet artists from the last half of the 20th century.  These artists, forced to practice their craft in secret and sometimes even into exile, reacted to a country that was under intense censorship and cultural isolation. They created a movement in which they rejected a Socialist agenda, sometimes with quiet clarity and sometimes with intensity and surreal imagery.  They often had to rely on sponsorship, and the auction contains nearly 30 works from the personal collection of one such sponsor, Ingrid Hutton.

Auction highlights include a post immigration work by Oleg Vassiliev of his time in New York and a Boris Orlov sculpture that uses irony to draw parallels between ancient Greek and Roman architecture and Soviet Imperialism. There is also Oleg Tselkov’s Meal, an otherworldly blue depiction of two men eating, and a bizarre Mikhail Chemiakin painting From the Carnival in St. Petersburg Series, as well as works from Erik Bulatov, Leonid Sokov, and Ilya Kabakov, among others.  For the complete catalog, bidding and registration go to Sotheby’s.