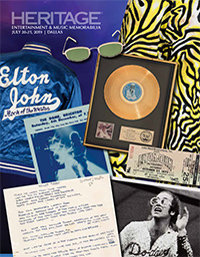 A Tupac Shakur ID with a color photo signed by the hip-hop star above the “Inmate Signature” line is one of the more unusual and heavily followed items in the Entertainment & Music Memorabilia Signature Auction from Heritage Auctions. The starting bid for Tupac Shakur’s 1995 prison ID is $15000. The auction contains a wide variety of items from different avenues of entertainment, primarily music, TV and film.

Also, in this auction, are several unique guitars owned and used by some of the most famous names in the music industry. The list includes Duane Allman’s circa 1961/1962 Gibson guitar, which is best known as the guitar he played on the live recording of “Statesboro Blues,” the opening track of At Fillmore West. This guitar was later purchased and played by Graham Nash. There are also several unusual prop memorabilia items from TV and film, notably a black leather/suede eye patch worn by John Wayne in the movie Rooster Cogburn, which still has makeup residue on the inside of the patch. See the entire collection of entertainment memorabilia and register to bid at Heritage Auctions.