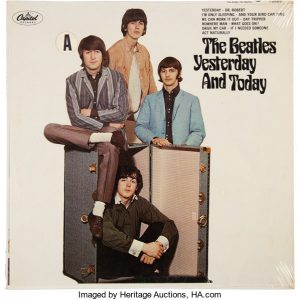 The upcoming Entertainment & Music Memorabilia Signature Auction, offered by Heritage Auctions, is anchored by a selection of collectibles from the recording industry. It will also include items from movies, television, and more.

One of the key lots in this sale is an ombré gray dress worn by Whitney Houston on the cover of I Look to You, which was her final studio album. The dress was designed by French fashion house Hervé Léger. It was also featured in the Whitney Houston exhibit in the Grammy Museum from August 2012 through May 2013. The lot includes a sealed CD copy of I Look to You and a certificate of authenticity from the Estate of Whitney E. Houston.

Another item up for bid is a life-size Mark V photon torpedo prop used in Star Trek: Generations, most likely in a scene aboard the Amargosa Observatory. Other available lots include a contract signed by Marilyn Monroe for her work on All About Eve, an original drawing by Kurt Cobain, a signed Rolling Stones Fender electric guitar, and more. View any of these lots and register to bid on Heritage Auctions.