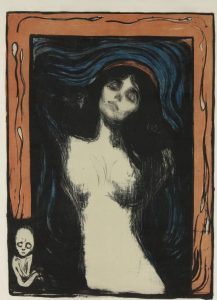 Artist Edvard Munch was active between the 1880s and 1940s. In his early years, Munch became a central figure in the Symbolist movement and later in the Expressionist style. He believed that rather than basing art on reality, it must convey an emotion or idea. Describing his expressive works, he said, “In common with Michelangelo and Rembrandt I am more interested in the line, its rise and fall, than in color.” One of his lithograph pieces will be highlighted in Sotheby’s upcoming online Important Prints & Multiples sale.

This event explores contemporary and Modern art spanning the 20th century. Leading the auction is a silkscreen painting by American Pop artist Andy Warhol depicting Marilyn Monroe. Drawing inspiration from American commercial culture, the lot exemplifies Warhol’s challenge to traditional art. Also offered is Pablo Picasso’s La Minotauromachie. This etching shows a young girl with a candle who illuminates a mythological minotaur. Between the two figures are a bullfighter and a horse. Explore the full catalog for this auction and register to bid on Sotheby’s.