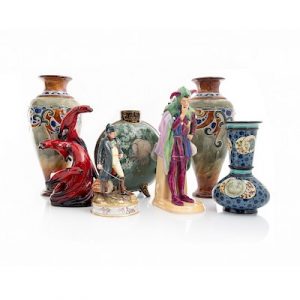 A dragon wraps its way around a blue vase with white daisies in bloom. This is the description of one of 700 lots in the upcoming Discovery Sale auction offered by Whitley’s. Lots in this auction range from vases and stoneware to jugs in the shape of William Shakespeare. For all their differences, though, what unites most of these lots are their over-the-top quality. This is an ideal auction for those with a taste for the theatrical.

With bidding starting at as little as $10, there is something in this auction in everyone’s price range. Among the most striking and affordable lots is a William Shakespeare character jug. The piece was produced in 1992 and was part of a limited 2,500 run by the English ceramic company Royal Doulton. Royal Doulton created many of the most notable pieces in this auction, including a figurine of Henry VIII. The piece is hand-painted in gold gilt. Produced in 1933, there are some age-related issues with the figurine’s condition. These include hairline cracks in Henry VIII’s coat.

Beyond collectibles, the Discovery Sale also has over two dozen vases. Among the most notable is the previously mentioned blue vase with a dragon and floral design. Like the Henry VIII figurine, there are some issues with the vase’s condition, including chips along the dragon’s body and tail. The auction also includes several flambé vases that are striking for their unusual appearance. Flambé vases have a red porcelain glaze with a distinct purple finish. Those interested in any of these pieces can register to bid online on Whitley’s website.