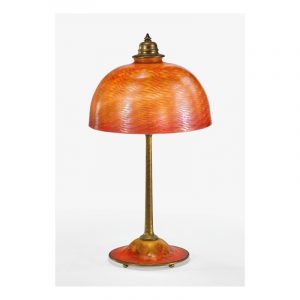 Launched in 1935, the S.S. Normandie ocean liner was an extravagant symbol of French nationalism. When the ship arrived in New York three years later, the escalating conflict in Europe prevented its return to France. The Normandie was indefinitely docked in Manhattan as a result. Several reverse-glass panels depicting the mythological birth of Aphrodite, executed by French artist Jean-Théodore Dupas, decorated the salon of this luxurious ship. The upcoming Design auction, presented by Sotheby’s, offers two panels from this set of murals.

The auction will also offer over 30 pieces from Marc Jacobs’ estate, including several works of 20th-century European design. Highlights include a statue by Georges-Lucien Guyot and a pair of armchairs by Jean Prouve. A peony border floor lamp by Tiffany Studios is another key lot. Peonies were a favorite theme of Tiffany Studios in the early 1900s due to the flower’s rising popularity in the West. View any of these lots and register to bid on Sotheby’s.