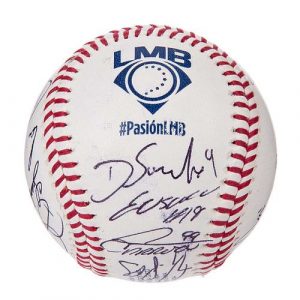 Lucha libre or “free fight” gained popularity in Mexico as a diversion from political turmoil in the early 20th century. Over time, masks became closely associated with these fights and allowed famous luchadores such as El Santo to retain anonymity for much of their careers. Coming to auction as part of the Sports United by Mexico auction, presented by Morton Subastas, is a lucha libre mask and equipment. The skeleton mask is draped with a yellow, red, and black hood. Before crossing the auction block, it was used by a luchador in the Lucha Libre AAA Worldwide promotion company.

Bidders will also find lots from other sports, including baseball, Formula 1 racing, and basketball. Collectors of baseball memorabilia can consider a baseball signed by the Los Angeles Angels center fielder Mike Trout. He signed the ball in Monterrey, Mexico, while playing in the 2019 MLB Mexico Series. The Angels were outscored 24 to 6 in the two-game series against their opponent, the Houston Astros. Basketball fans will find a Chicago Bulls jersey signed by players on the team during the 2018 Mexico City Games. Those interested in this or any other lot can register to bid on Bidsquare.