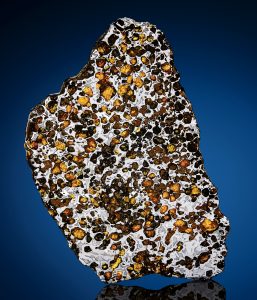 The upcoming Deep Impact: Lunar and Rare Meteorites auction, presented by Christie’s, offers 47 lots of naturally sculpted metallic meteorites. A standout piece in the collection is the single largest sample of the Moon known to exist. This Moon rock contains volcanic glass, white anorthite, and other crushed rocks. The meteorite was discovered in the Sahara desert at the Algerian and Mauritanian borders in January of 2017. According to the lot essay, this sphere’s characteristics hold evidence of asteroidal collision on the Moon that occurred centuries ago.

A Gibeon meteorite tabletop sculpture is also highlighted. Gibeon meteorites were formed in the early stages of the solar system and some were shattered by a collision with another asteroid. As the rocks collided, pieces rained down in the Kalahari desert in Namibia. A partial slice of Esquel pallasite is also available in this sale. Esquel is among the most coveted crystals with colors ranging from amber to emerald. Visit Christie’s to view the entire collection and register to bid.