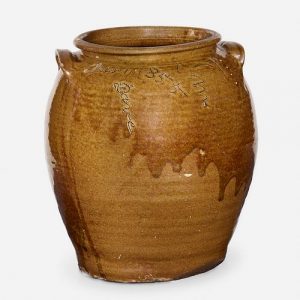 David Drake, also known as Dave the Potter, was born in South Carolina in the early 1800s. While enslaved, he worked under several pottery kiln masters, including Lewis Miles. Drake learned pottery very early in his life. He went on to create gigantic stoneware pots between 1830 and 1864. During that time, literacy was outlawed among enslaved people in the United States. However, Drake eventually learned to read and write. He signed many of his pots and, in some cases, included poems, Bible quotes, or other short phrases. Rago’s upcoming design sale will offer a jar by David Drake. The bulbous food storage jar has an open neck, handles on each side, and a brown alkaline glaze.

The auction catalog features examples of early 20th-century American and European design, from Tiffany Studios to Josef Hoffmann. A Tiffany Studios Dandelion lamp is among the leading lots. Created in 1900 for the World’s Fair, the lamp includes a copper base with multicolored patinations and dandelion patterns. A Favrile glass globe tops the piece. Visit Bidsquare for more information and to place a bid.