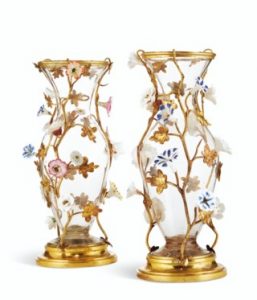 The Dalva Brothers is a third-generation firm specializing in 18th-century decorative arts from numerous countries. They’ve sold pieces to the Louvre, the Metropolitan Museum of Art, and others. Christie’s presents an auction with over 250 lots from the Dalva Brothers firm, particularly featuring French furniture. One of the highlighted lots is a Louis XVI ebony secrétaire en cabinet. A huntsman and his dog, a man in a turban, and floral displays all decorate this piece. The Louis XVI style signified a return to Greek and Roman tastes and is associated with Marie Antoinette, among other historical figures.

Also from France is a terracotta vase by Rococo sculptor Claude Michel, also known as Clodion. Two men with goat-like horns serve as handles on either side of the vase. Cherubs, which are a recurring image in Clodion’s work, line the bottom half of the vase. Clodion was an internationally-collected artist, with Catherine II among those familiar with his work. His connection to the rich and powerful would cause him problems, though, during the French Revolution: Clodion was forced to flee Paris for his birthplace of Nancy.

Bidders will find an Italian walnut mirror from the late 17th century in this event. Children, birds, and fish emerge from the interlocking branches that surround the mirror. Also available is a German sycamore desk and drawer set from 1780. The top half opens to reveal a velvet-lined table, while birds mingling on branches decorate the drawer’s sides. View each of these lots and register to bid on the Christie’s website.