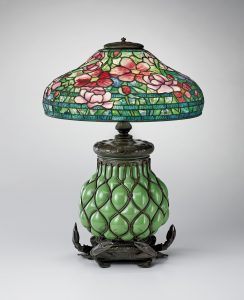 Acclaimed for his surreal animal sculptures, François-Xavier Lalanne tried his hand at painting before focusing on sculpture. He and his wife, Claude Lalanne, became one of the most creative art duos of the 20th century. For his sculptures, Lalanne drew inspiration from animals, which soon sparked interest in collectors such as Yves Saint-Laurent. Lalanne created works that added an artful element to the daily domestic experience. He once said, “The animal world constitutes the richest and most varied forms on the planet.” Lalanne’s bronze and glass table will be highlighted by Christie’s in the upcoming Creating Space: Design Online auction. The table is shaped like a sitting monkey who holds the glass top with his upraised arms.

American Greek sculptor Peter Voulkos is considered the first ceramic artist to free clay from its traditional limitations by including gesture and sculpturally expressive forms. A participant in the resurgence of American studio crafts, he helped change the viewpoint that ceramics were merely utilitarian objects. Available in this sale is an untitled ceramic sculpture by Voulkos, executed between 1960 and 1964. Another highlight of the auction is a peony table lamp with a crab base from Tiffany Studios. View these lots and register to bid on Christie’s.