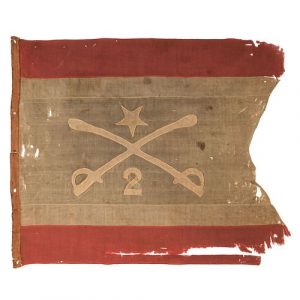 Philip Henry Sheridan was a notable general in the American Civil War era, rising from Captain to Major General in just six months. His leadership was instrumental in the defeat of the Confederate army in Shenandoah Valley and later in Lee’s surrender at Appomattox. His personal flag, flown through the summer of 1862, is now up for auction in the upcoming American Historical Ephemera & Photography event at Cowan’s Auctions.

The sale presents over 400 collectible items. One notable photograph from the collection is a half-plate daguerreotype of a fully leather-clad firefighter of the Sansome Hook and Ladder No. 3 of San Francisco. The catalog also offers early photographs capturing  Zachary Taylor, men from the Alaskan gold rush, soldiers from the Civil War period, and more. Other items of interest in the sale include a 13-star American flag, a painted cotton banner of Abraham Lincoln, Theodore Roosevelt’s presidential standard, and an endorsement signed by Lincoln. View any of these lots and register to bid on Bidsquare.