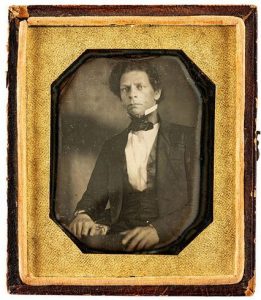 Cowan’s Auctions will present its first dedicated African Americana sale in mid-February. Leading the event is an early daguerreotype of Joseph Jenkins Roberts, the first and seventh president of Liberia. Roberts was born the son of free Black Americans in the early 19th century before settling in Liberia. He helped establish Liberia as a republic and headed the state before and after the American Civil War. The available daguerreotype shows Joseph Jenkins Roberts in the 1840s. It was taken earlier than all previously-known images of Roberts.

The upcoming auction traces the history of the Black American experience from the 18th century through the civil rights movement of the 1960s. One of the key lots is a recording of Dr. Martin Luther King Jr.’s 1956 address at a National Negro Funeral Directors Association convention. Few copies of these 33 RPM vinyl records were produced and this is the first to come to auction. The catalog also offers photography from the civil rights movement, including a press photo from Dr. King’s 1965 march in Montgomery, Alabama. He is shown arm-in-arm with Reverend Ralph Abernathy, James Foreman, Reverend Jesse Douglas, and John Lewis.

Bidders can consider ephemera from America’s history of legal slavery and segregation. Reward papers for runaway enslaved people, a “colored” restroom sign, and a selection of abolition documents will be available. Visit Bidsquare for the complete catalog and to place a bid.