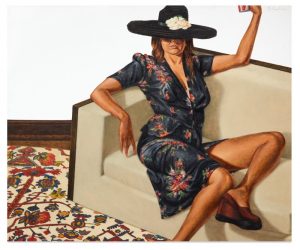 Sotheby’s Contemporary Art Day Auction presents late 20th-century fine art from around the world. That includes Barkley L. Hendricks’ portrait Jackie Sha-La-La. Hendricks aimed not only to capture a person’s likeness in his portraits but also their personality. Here, Jackie’s eyes are covered by an elaborate hat as she makes herself comfortable on a couch. Like many of his contemporaries, Hendricks did not shy away from pop culture, represented here with the Coca-Cola can that Jackie holds just within view.

Representing Jean-Michel Basquiat in this sale is a drawing produced in 1988, the year of his death. In the drawing, Basquiat presents a busy marketplace offering salves, raw diamonds, and walkie-talkies. Buzzwords like “AUTHENTIC” and “EXTRA EXTRA” fly in different directions.

Also inspired by commodities is Wayne Thiebaud’s painting of an ice cream cone, titled Single Triple Decker. Unlike his Pop Art contemporaries, Thiebaud depicts products like cakes and ice cream without cynicism. “[W]here Warhol was cool and ironic,” the critic Cathleen McGuigan writes, “Thiebaud was warm and gently comic, playing on a collective nostalgia just this side of sentimentality.” Register to bid in this sale on the Sotheby’s website.