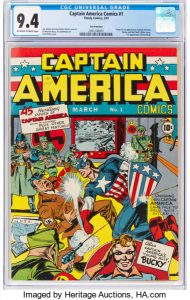 The Comics & Comic Art Signature Auction, offered by Heritage Auctions, contains a collection of highly sought-after items from the world of comics, including Captain America Comics. Distributor markings as well as the “Tom Reilly” stamp in the middle of the back cover identify this as one of the highest-ranking pedigrees (San Francisco) from the Golden Age, putting it among the most desirable comic books ever offered by Heritage. Another valuable lot is the complete copy of Superman’s first issue, prized among collectors, currently ranking at 3rd place in Overstreet’s Top 100 Gold Age Comics list. Finally, among the original art pieces offered here is the cover painting for Creepy #17. This is a striking work, by master illustrator Frank Frazetta, of an executioner standing at the ready, axe in hand. This painted piece was exhibited at the Museum of American Illustration in 2005. View any of these lots and register to bid on them at Heritage Auctions.